USF NEWS
Home SPORTS GOLF In long-awaited return, will Brian Ortega be better than ever?
SPORTSGOLF

In long-awaited return, will Brian Ortega be better than ever?


Brian Ortega earned his way to a UFC featherweight title fight in December 2018. That’s a fact. No one handed him that opportunity. He proved himself championship-worthy by winning six consecutive fights in the UFC.

And at the same time, Ortega’s loss to then-champion Max Holloway at UFC 231 two years ago exposed just how far he had to go to become the best in the world. Ortega was, frankly, completely outclassed in a TKO loss — to the point where Holloway famously started giving him pointers midfight. Ortega went into that night undefeated and came out of it with observers wondering if he would ever be the same.

Saturday’s UFC Fight Night features two fights with title implications. In the main event, Brian Ortega, who is ranked No. 3 in ESPN’s featherweight rankings, will take on Chan Sung Jung, better known as “The Korean Zombie.” Jung is ranked eighth and has stopped his past two foes in the first round. Meanwhile, former strawweight champion Jessica Andrade will move up to 125 pounds and take on the third-ranked Katlyn Chookagian.

Since then, Ortega (14-1) has done exactly what you would have hoped. He took time to heal and made the very hard decision to leave his boxing coach, a mentor who had trained him since he was a teenager in Los Angeles. He went from primarily training in a garage by himself to training alongside other professional fighters — including a couple of former and current champions.

Saturday’s UFC Fight Night main event in Abu Dhabi, United Arab Emirates, will unveil Ortega 2.0. And it will see him face a surging contender in Chan Sung Jung (16-5), who has finished three of his last four opponents by knockout inside the first round. It’s a massive fight for Ortega to come back to, one against a viciously skilled opponent. And UFC president Dana White already has declared it a No. 1 contender fight.

It’s unusual to see a fighter come back from a nearly two-year layoff and a dominant loss to a No. 1 contender fight. But that speaks to the unusual case of Brian Ortega. Has he shored up the holes that Holloway exposed, and learned how to maximize the potential that carried him to a title fight in the first place? Or did that one traumatic night against Holloway show his true ceiling?

And is Jung, also known as the Korean Zombie, simply so good right now that it won’t even matter if Ortega is on point?

It all makes for a very intriguing main event on Fight Island.

679: Days it will have been on fight night since Ortega last fought. That was a TKO loss to then-champ Max Holloway on Dec. 8, 2018. For Ortega’s last victory, you have to go back 959 days — more than two years and seven months ago — to his KO of Frankie Edgar in March of that same year.

6: Finishes by Ortega and Jung, tying them with Charles Oliveira and Conor McGregor for the second most among active featherweights, four behind Holloway.

6: Consecutive main events for Jung, the longest streak in UFC history among fighters to never win a championship. Jung did once challenge for a belt, losing to then-champion Jose Aldo by fourth-round TKO in 2013.

1: Strikes already landed in this rivalry. Score it for Ortega — but not against Jung. While in the stands at UFC 248 in March, Ortega slapped Jung’s friend Jay Park after taking offense at barbs directed his way by the Korean-American rapper during the buildup to this matchup when it originally was scheduled for last December. Ortega later apologized.

And the winner is … 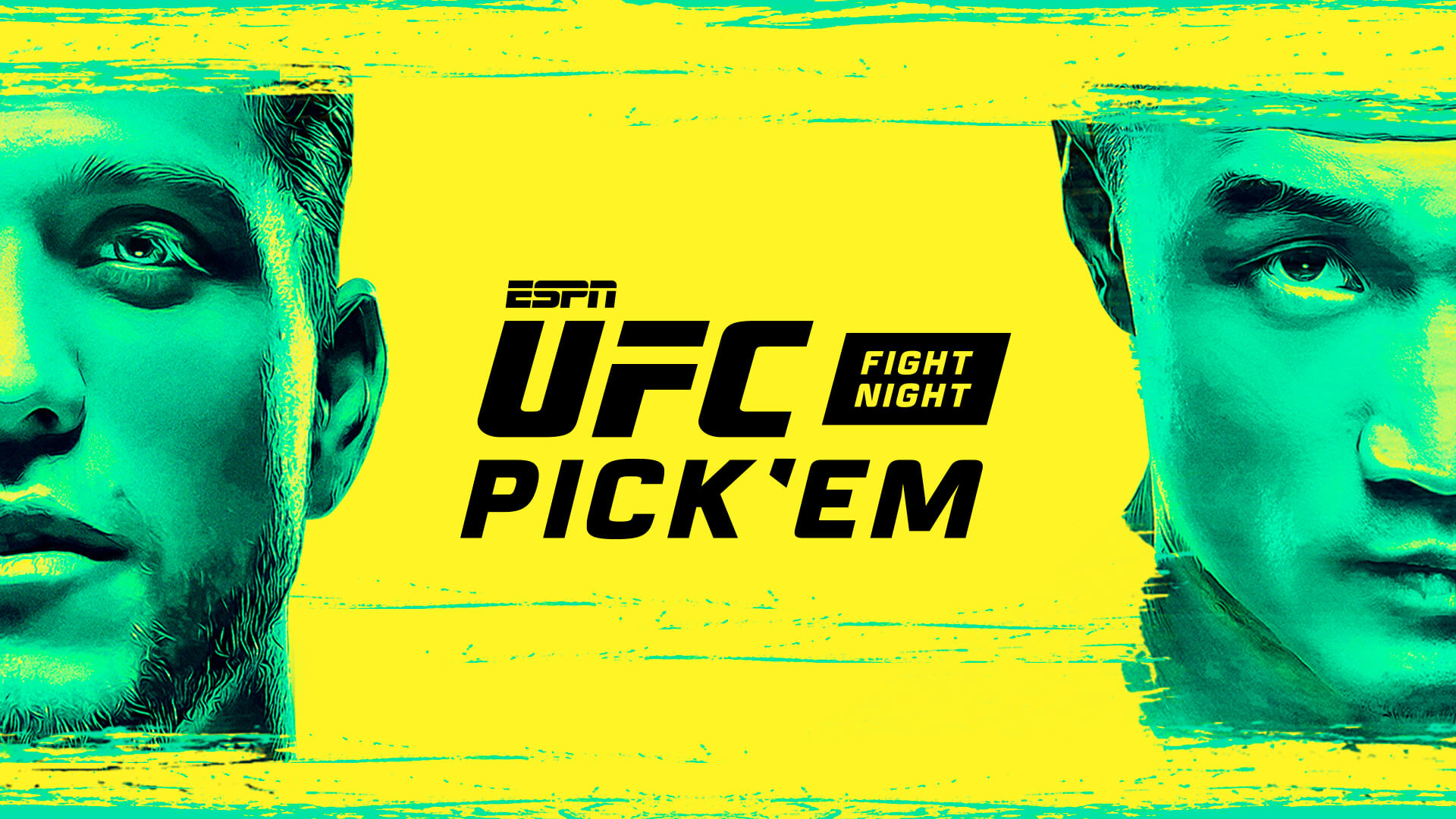 Answer questions and compete to win a FREE streaming of UFC 255! Make Your Picks

Jung has looked very good since he returned to action in 2017 following mandatory military service in South Korea. His power is clearly legit, and he was on the verge of beating Yair Rodriguez in a 25-minute stand-up fight two years ago before suffering a heartbreaking knockout in the final second (arguably the greatest knockout in UFC history). It’s hard to go against Zombie’s momentum right now, but I can’t shake this feeling that two years of change is going to make a world of difference for Ortega. What if his wrestling has improved dramatically? What if his striking defense has done the same? I am bought in on the idea of an Ortega 2.0. I’m expecting a back-and-forth competitive fight, and I’ll go with Ortega to pull it off by submission, third round.

How to watch the fights

Watch the fights on ESPN+. If you don’t have ESPN+, get it here.

1. Former UFC strawweight champion Jessica Andrade makes her flyweight debut when she takes on Katlyn Chookagian, who is two fights removed from challenging for the 125-pound title. Andrade will become just the second female fighter in UFC history to fight in three divisions, joining Valerie Letourneau. Chookagian is No. 3 in the ESPN women’s flyweight rankings, while Andrade is ranked fourth at strawweight. A couple more quick notables: All seven of Chookagian’s UFC victories have been by decision, and an Andrade win would put the Brazilian in a tie with another former 115-pound champ, Joanna Jedrzejczyk, for the most victories by a woman in UFC history.

Monday through Friday, host Pablo Torre brings you an inside look at the most interesting stories at ESPN, as told by the top reporters and insiders on the planet. Listen

2. Jimmy Crute, who faces Modestas Bukauskas at light heavyweight, landed eight takedowns in his last fight, a first-round submission of Michal Oleksiejczuk in February. According to UFC Stats, that is the most takedowns ever by a fighter in a first-round finish.

3. Claudio Silva puts a 14-fight winning streak on the line when he faces 36-fight veteran welterweight James Krause. Silva is 5-0 in the UFC, making him one of 12 Brazilians to win their first five UFC fights.

4. Former KSW lightweight champion Mateusz Gamrot brings a 17-0 record into his UFC debut against 11-2 Guram Kutateladze, who is also making his first Octagon appearance. Gamrot has the third best record on the UFC roster, behind only Khabib Nurmagomedov (28-0) and Israel Adesanya (20-0).

5. No female fighter on the roster has more submission wins in the UFC than flyweight Gillian Robertson, who picked up her fourth against Cortney Casey in June. Robertson faces Poliana Botelho, who is 3-1 in the UFC, with her only loss coming to Cynthia Calvillo — by submission.

Translation: Gwyneth Ho on the Meaning of June Fourth to Hong Kong

Gwyneth Ho Kwai-lam is one of 47 Hong Kong pro-democracy activists charged with subversion under the National Security Law for running in a...
Read more

Nine Years after Anti-Japanese Protests, Two Families Forever Shattered by One Act of ViolenceLi Jianli and Wang Juling in Thailand in 2019.The doctor...
Read more

8Many years ago, David Dayton over at the Silk Road International Blog did an excellent...
Read more

Splitting Salaries of Non-Chinese Employees: The Legal and Tax Issues

Our China lawyers are often asked whether it is legal to pay non-Chinese employees from...
Read more

It was during a routine booze and bacon run when I fatefully stumbled upon this jammy giant in the mid-north NSW coastal town...
Read more
ASIA

A man surprised his sick wife by transforming their backyard into a holiday resort. Source link
Read more