A structural shift in the South African fixed income market is underway that makes it unlikely that money market investments will be able to deliver positive real returns for investors as they have been doing for years.

One of the key objectives of investing is for the investment to deliver a real return: a return that outpaces inflation.  Over the past couple of years, South African investors have been in the fortunate position of achieving positive real returns from their money market investments – and not having to take on much risk to achieve these returns. But that is no longer the case.

How did we get here? A 3% decline in official interest rates to stimulate an SA economy hard hit by the pandemic has seen money market yields decline in absolute terms. Also, bank yield spreads have compressed in response to the fastest rise in bank deposits in the last two decades. Finally, with inflation forecast to increase to above 4% next year – the benchmark yields will need to beat to deliver above-inflation returns is increasing.

The money market took significant strain when the COVID-19 crisis took hold earlier this year, resulting in liquidity pressures in the fixed income markets. The South African Reserve Bank (SARB) quickly stepped in to alleviate mounting stress by relaxing certain of the regulatory capital requirements for the banks, freeing up liquidity and normalising money markets. As a result of these measures, banks built up excess cash reserves. The SARB also cut interest rates by three percentage points to levels not seen in 20 years, if ever, to stimulate the ailing economy.

At the same time, investors have been de-risking and moving into cash and money market-type investments. These have also found their way to the banks in the form of deposits. Chart 1 shows the much faster growth trajectory of bank deposits this year compared to any one of the previous 10 years.

At the same time, a lack of bank appetite for risk and subdued personal demand for credit in a challenging economic environment saw a steady decline in private sector credit demand year on year.  Banks, not wanting to attract any additional money, sought to disincentivise depositors by slashing their funding spreads. (Chart 3) 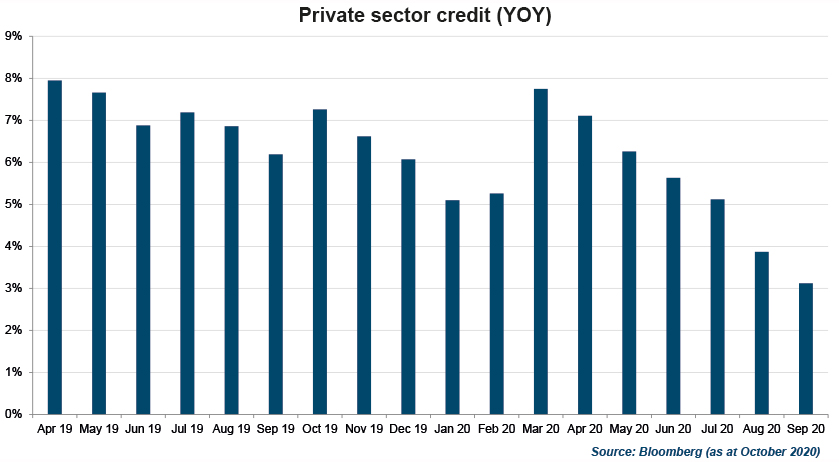 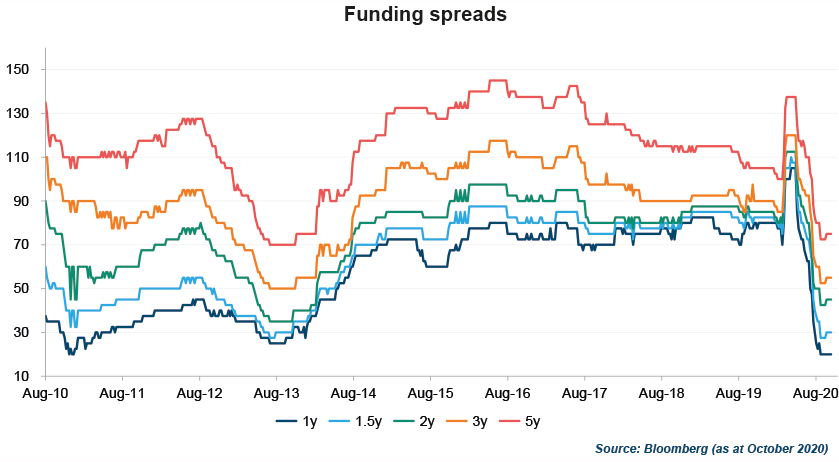 The combination of low absolute yields and the tight spreads offered by the banks have translated into the current low yields offered in the money market space. Yields that will, in all likelihood, remain below inflation in the future. Currently, a five-year money market investment earns 4%, and next year inflation is expected to be above 4% and remain there for the medium term.

One of the key objectives of investing is for one’s investment to deliver a real return: a return that outpaces inflation.  Over the past couple of years, South African investors have been in the fortunate position of achieving positive real returns from their money market investments – and not having to take on much risk to achieve these returns. But that is no longer the case.

The question then becomes, where to for investors seeking a positive real yield?  In stark contrast to the money market, the South African bond market currently offers the highest real yields in the world. Although they are high because they are factoring in certain risks, we believe these offer investors the opportunity to achieve the real returns they are seeking.

Chart 4 below shows the expected total return over one year for South African bonds with different terms to maturity if the market remains at current levels. It also shows what the returns would be over one year if yields shift up or down, as per the scenarios shown. What is evident from this graphic is that there is a lot of value in South African bonds on both an absolute and real return basis. If looking at the seven-year area of the curve, total one-year returns are in the order of 9.5%, and even if inflation is at the upper end of the MPC target range at 6%, it is still a healthy real return. If yields are a percent higher, a one-year total return of 5.8% remains above the money market rate of 4%. Thus even in a pessimistic scenario, where yields rise 1% from current levels, bonds will still likely outperform cash investments. 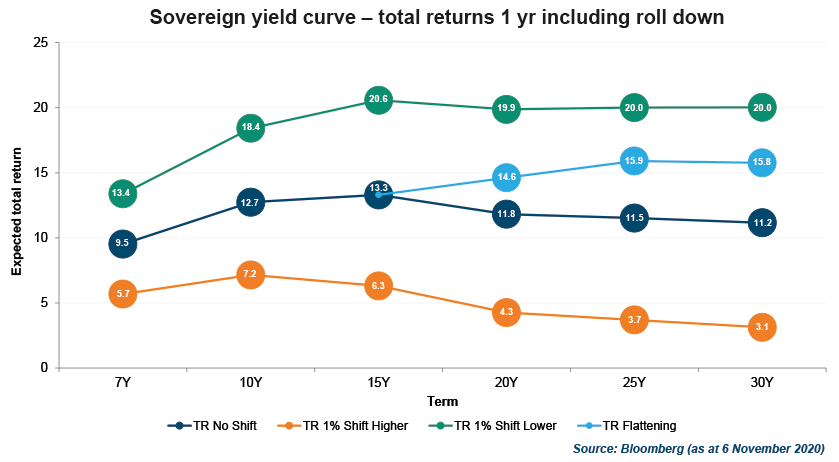 Why are yields on government bonds so high? The number one risk flagged by investors is the possibility of the government defaulting on its local currency debt if it cannot afford to meet its growing debt commitments. In the recent Medium-Term Budget Policy Statement, the National Treasury projected a government debt-to-GDP ratio of nearly 100% in five years. High as this may be, we believe it is unlikely that SA will default on its local currency debt because the government would put the entire financial system at risk of collapsing.

It is more likely that the government would opt for some of the other tools at their disposal to avoid outright default. Some of the alternatives would be “printing money” or quantitative easing, yield curve control or introducing prescribed investments.

The reason a default would be so catastrophic is that banks own 23% of the bonds (see graph below) and thus government’s inability to pay back the money it’s borrowed would undermine the entire financial system. Foreigners, who own 30% of local government debt, would also disinvest, resulting in the flight of capital and pension fund valuations would be materially affected. However, this is an Armageddon scenario and, we believe, should not be a central scenario in any assessment of the SA bond market. 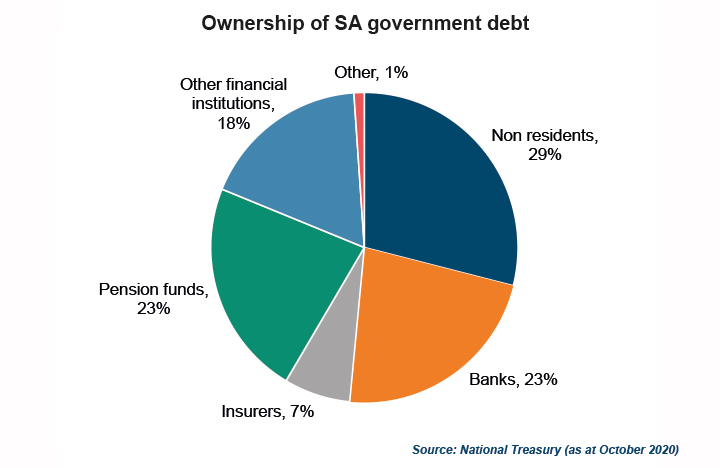 A second risk to bond investments and the real returns they offer is inflation proving to be higher than expected. Globally, we have experienced a period of subdued inflation, but, with the increase in debt globally and the stimulus introduced by central banks, the upside risk to inflation has undoubtedly increased. However, even in the event of higher inflation, it is unlikely that inflation will become so unhinged that it rises above the yields currently on offer in the SA bond market.

There is no doubt that risks in the bond market have risen on the back of the precarious fiscal position in which South Africa finds itself. Minister Tito Mboweni eloquently phrased it as “we must walk while we still have light”, highlighting the urgency of the matter. There’s little doubt that time is running out for the government to fix its unsustainable debt profile.

Against this challenging backdrop, we can expect increased volatility in the bond market. Nevertheless, if you consider a hard default on the debt or runaway inflation unlikely, the bond market does offer attractive returns. To unlock these, however, you will need to have a risk appetite that enables you to ride out the likely increase in volatility. This will put you in line to achieve the real yields we believe are there for the taking.  BM/DM 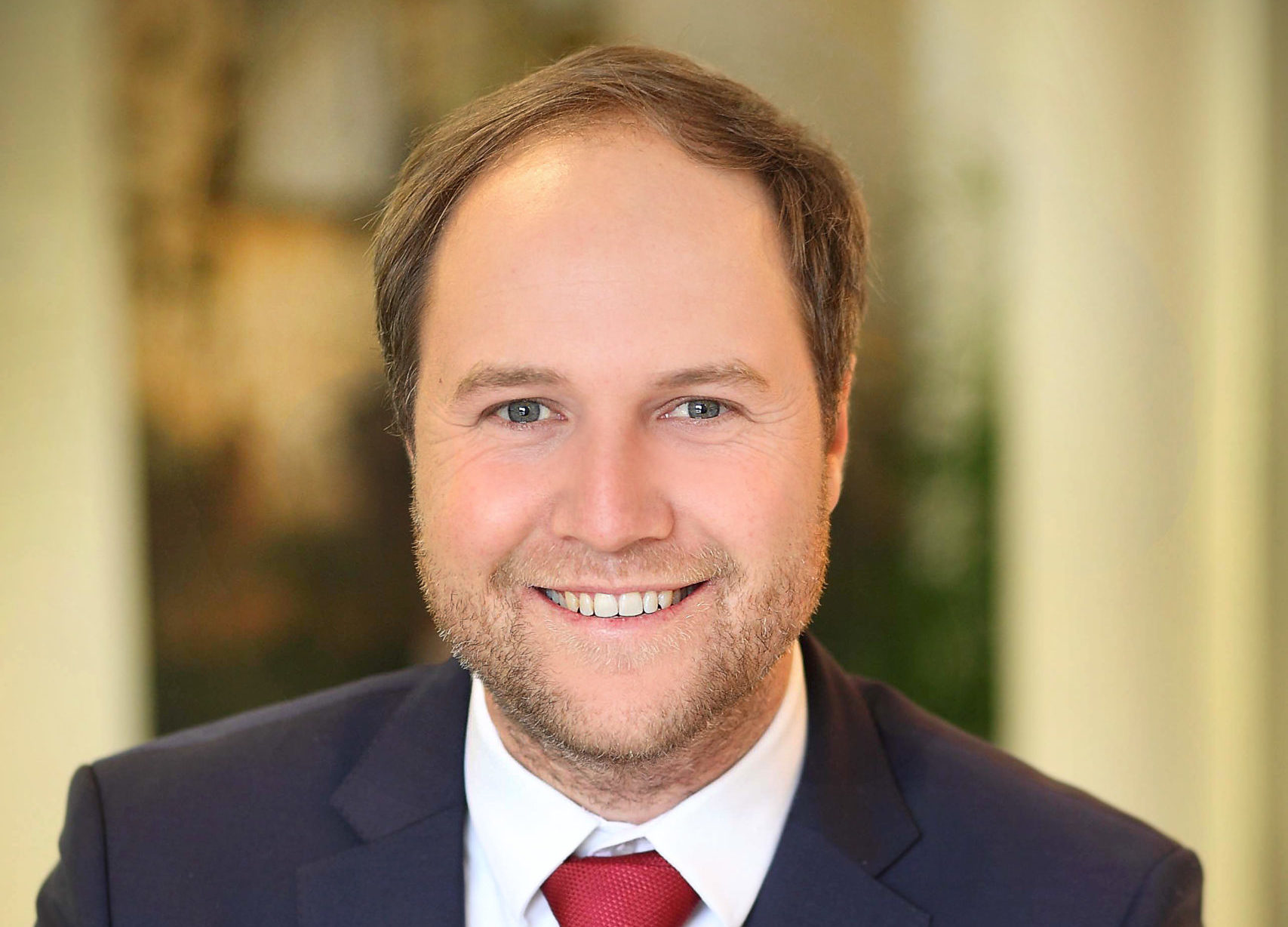 Collective Investment Schemes in Securities (CIS) should be considered as medium to long-term investments. The value may go up as well as down and past performance is not necessarily a guide to future performance. CIS’s are traded at the ruling price and can engage in scrip lending and borrowing. A schedule of fees, charges and maximum commissions is available on request from the Manager. A CIS may be closed to new investors in order for it to be managed more efficiently in accordance with its mandate. Performance has been calculated using net NAV to NAV numbers with income reinvested. There is no guarantee in respect of capital or returns in a portfolio. Prescient Management Company (RF) (Pty) Ltd is registered and approved under the Collective Investment Schemes Control Act (No.45 of 2002). For any additional information such as fund prices, fees, brochures, minimum disclosure documents and application forms please go to www.prescient.co.za.

The forecasts are based on reasonable assumptions, are not guaranteed to occur and are provided for illustrative purposes only.

Newly elected Tshwane Mayor Randall Williams said he would co-operate and engage with opposition parties to ensure the council and by extension, the...
Read more
EUROPE

CSA vs Sascoc latest: ICC responds to Sascoc letter, ahead of meeting between the two bodies